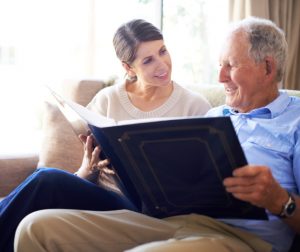 When we are working with those diagnosed with Alzheimer’s, it is important to know their stories. What is their history? Where did they live? Who comprised their family? What are some of their most powerful memories? What did they do for a living? And what were their hobbies? If you’re not getting the picture, you might wonder why all of this matters. As the best Alzheimer’s care company in Phoenix, we can help you understand the importance of listening to the life stories of senior loved ones suffering from dementia.

It matters because those with Alzheimer’s increasingly live in the past, so that the “old memories” are new again. This applies to so many things in their reality. For instance, a gentleman I remember would become very agitated when it snowed and fret that the animals would freeze if they weren’t protected. At first the family thought that Dad was having a psychotic episode since he had never talked about animals before. Then one day his children discovered a very old picture of their dad when he was a little boy. It was probably taken in the 1920s and showed their dad standing in a field surrounded by cattle. This was right before the Great Depression, when his family lost their farm and the gentlemen lost his dad. He would have been a great-grandfather to the current children, who knew nothing about these losses. Their dad had never talked about what he’d been through, but now he was reliving it. Once the family realized what was happening, they would reassure their father whenever there was bad weather that every animal was locked safely in the barn. He continued to ask about the animals when it snowed, but he was able to relax after hearing they were safe.

Another gentleman had been a wood carver all his life and now lived in North Carolina with his son and daughter-in-law. They were concerned about his failing memory and had him evaluated by a geriatric neurologist, who diagnosed the man with Alzheimer’s at Stage 4-5 on the FAST scale. The family worried that it was no longer safe for Dad to carve wood, but the doctor assured them that wood carving was second nature to their father. They just needed to watch him and they would know when this hobby was no longer safe for him. They did this over the course of several years as his Alzheimer’s continued to grow worse. Finally, they decided assisted living was the safest place for him.

When he was admitted to the facility, the daughter-in-law told the staff how important carving was to Dad and supplied him with bars of Ivory soap and plastic picnic knives every week. The old man would sit in a chair with a trash can between his knees, lean forward, and carve the Ivory soap. Did he carve the beautiful woodland figurines that he had once carved? No, but he continued to carve. His family knew how important this was to their father’s well-being, so they made it happen in a very safe way.

The stories of our patients are like valuable, buried treasures. When caregivers can unlock the past and dig up these stories, it is a transformative experience for the story teller and the listener, too.

The Phoenix home care team at Nightingale Homecare is always thinking creatively when it comes to enhancing quality of life for those with Alzheimer’s disease. Our Connections Dementia Care Program, staffed by Alzheimer’s Whisperers®, helps those with dementia better manage a full range of challenging behaviors: wandering, repetition, nutritional concerns, sundowning, and much more. Contact Nightingale Home Care, the top Alzheimer’s care company in Phoenix, for a free in-home consultation to allow us to offer care solutions for your loved one by calling (602) 504-1555 any time.

About the Author: Verna Benner Carson, P.D., PMHCNS-BC, is president of C&V Senior Care Specialists and Associate Professor of Nursing at Towson University in Baltimore, MD. Dr. Carson can be reached at vcars10@verizon.net.


Warning: Use of undefined constant php - assumed 'php' (this will throw an Error in a future version of PHP) in /home/ngcareadmin/public_html/wp-content/themes/phx/single.php on line 40