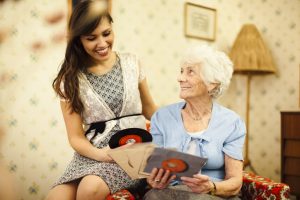 Top providers of home health in Scottsdale explain the fascinating connection between music and Alzheimer’s.

Have you ever heard a song playing on the radio and found yourself transported to a time and place from the past? Have you ever had a song stir your deepest emotions – and bring back those memories as if they were happening in the present? Have you been comforted, stimulated, saddened, elated or experienced some other powerful emotion just because of a song? Most of us have had such experiences, and the power of the “remembering” elicited by music can catch us “off guard” when the song evokes emotionally-charged memories.

Music has the same power with individuals diagnosed with Alzheimer’s disease or dementia, and knowing this provides one more tool to help families or caregivers to manage challenging behaviors, to reach someone who appears to be lost in the disease, to calm an agitated individual and encourage cooperation in activities such as bathing that might otherwise be met with resistance. Some research even indicates that music can help restore lost memories and bring those afflicted with the disease back into the present – if only for a short period of time.

These facts about the power of music seem to fly in the face of the progressive loss of memories associated with Alzheimer’s disease – starting with the most recent and steadily erasing long ago memories going back in time. However, it is important to know that the memories of music are “wired” differently in the brain than other memories – it is almost as if the brain is made to contain music. Whereas short-term memories are stored in the hippocampus, music is stored everywhere in the brain, and music with all of its emotional meanings continues to be accessible to people with Alzheimer’s disease, even when they have lost the ability to speak – many can still sing!

What a powerful idea this is! If caregivers fully appreciated the significance of music they would use it all the time and to facilitate many activities of daily living. Caregivers have shared that they engage the person with Alzheimer’s in singing while the individual is bathed and dressed. Nurses sometimes use music while they are performing a painful procedure such as dressing a wound or drawing blood – music can distract, can soothe and can engage the person with Alzheimer’s disease.

Recent research conducted by Brandon Ally, an assistant professor at Boston University, where 32 Alzheimer’s patients participated in a study that examined the power of music, found that these subjects were able to learn more lyrics when the words were set to music than when they were spoken. Ally believes that the results of this study suggest that those with Alzheimer’s could be helped to remember things that are necessary to both their independence and well-being. For instance, creating a short ditty about taking medications or the importance of brushing one’s teeth might be a strategy to help those with Alzheimer’s disease maintain abilities to perform these necessary skills. This was the first study to demonstrate that using music can help people with Alzheimer’s to learn new information.

In the famous YouTube video Man in Nursing Home Reacts To Hearing Music From His Era, we see Henry, a man who was almost totally unresponsive, begin to respond with sound, movement and facial animation when he uses an iPod programmed with “Henry’s music.” After the iPod is removed, Henry is not only quite spirited, but totally involved in the ensuing conversation. He is able to discuss his favorite musician, Cab Calloway, and when asked, “What is your favorite Cab Calloway song?” Henry begins to sing, “I’ll Be Home for Christmas.” Not only is his speech perfectly clear, his face is expressive, he uses his hands in explaining the emotional power of music. The interviewer inquires of Henry, “What does Cab Calloway’s music mean to you?” Henry talks about what music does for him – that the Good Lord changed him through music and made him a “holy man.” The transformation of Henry is nothing short of miraculous and raises questions about why music is not used in every home, in every assisted living facility, and in every skilled nursing home where someone with Alzheimer’s is cared for.

Music should be a routine part of care; not only does it bring joy to the person with this terrible disease, it allows for continuing connections between the caregiver and the person with Alzheimer’s disease. It diminishes the lonely isolation that is part of the disease when the afflicted person appears to be locked in a world that is isolated and isolating to others.

One more story about the power of music: a gentleman named Ben shared this story about his wife who had been diagnosed with Alzheimer’s and was well into the middle stage when he placed her in a facility for care. Ben visited often, and one of the techniques he used to stay connected to his wife and to make the visits pleasant and meaningful for both of them was to draw on his wife’s past history with music. She had sung for many years with the Sweet Adelines and she retained her lovely singing voice despite the ravages of Alzheimer’s disease. Ben loaded music that his wife had sung through her years with the Sweet Adelines. He attached two sets of earphones into an iPod – one for his wife and one for himself, and they would sing together. Music was a powerful connection between them that remained until his wife passed away.

At Nightingale Homecare, providers of the highest quality home health Scottsdale families trust, we are passionate about helping those with Alzheimer’s disease live life to the fullest. Our Connections Dementia Care program incorporates music and a variety of other creative techniques to enhance quality of life. Contact us at (602) 504-1555 for a free in-home consultation to learn more about our specialized dementia care services.

About the Author: Verna Benner Carson
P.D., PMHCNS-BC, is president of C&V Senior Care Specialists and Associate Professor of Nursing at Towson University in Baltimore, MD. Dr Carson can be reached at
vcars10@verizon.net