Psychotropic Medications: Are They Helping or Harming Seniors? 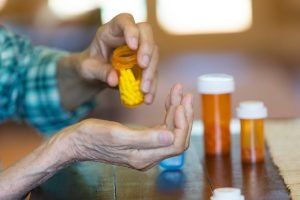 At Nightingale Homecare, the top provider of home care in Paradise Valley, we want to help seniors and their caregivers better understand the types of psychotropic medications they may be prescribed, how they can help, and the effects they may experience.

Some examples of psychotropic medications include:

The use of psychotropic medications and opioids has increased steadily in older adults over the last ten years. In the United States, people over the age of 65 represent just 13 percent of the population, yet this age group takes over one-third of the drugs prescribed in this county. What is even more disturbing is that a recent study found that the number of older Americans who take three or more brain-affecting medications has doubled in the last ten years. For adults age 65-80, nine out of ten have prescriptions for psychotropic medications written by a doctor that is not a psychiatrist.

Although they can be beneficial at times, psychotropic and opioid medications can also be dangerous when taken by older adults, especially when taken long-term. The elderly are more sensitive to the effects of these medications because most drugs are eliminated from the body through the kidneys and liver, both of which may work less efficiently in later years. Another age-related change is an increase in the amount of body fat. Seniors are at high risk for “drug toxicity,” or the result of drugs accumulating in the body because the drugs are often stored in fat. Drug toxicity is very serious and can be fatal.

Even though there is a well-known connection between the use of psychotropic medications in older adults and the potential toxicity from them, health care professionals often do not recognize what is happening. More than likely, they attribute the symptoms of medication toxicity to some sort of new health condition or worsening of an existing health condition.

Side effects from psychotropic drugs are more frequent and severe in older adults, especially feelings of sleepiness or being “out of it.” Memory and movement problems are also very common and can lead to falls, fractures and other accidents.

Most older adults who take psychotropic medications also take other prescribed and over-the-counter medications. Because of this, careful evaluation is needed to make sure that unwanted, uncomfortable or dangerous side effects and interactions are not occurring. Bad medication reactions commonly include: hallucinations, confusion, dizziness, constipation, drowsiness, weakness, slurred speech, lack of balance or coordination, slow and shallow breathing, poor judgement, falls with broken bones, addiction and even death. In addition, a recent study found that use of benzodiazepine (or anti-anxiety medication) results in a higher risk of developing Alzheimer’s disease.

Hospitalization due to bad drug reactions occurs about four times more frequently in older patients than in younger ones – and, these bad reactions could have been prevented in almost 90% of cases!

Due to the risks involved, psychotropic medications should only be prescribed by a senior’s doctor after very careful consideration, and only after trying medications or treatments that pose a lower health risk.

When considering treatment foranxiety, depression, psychological distress, sleep disorders and chronic pain,non-pharmaceutical strategies are often considered preferable to drug options in the elderly. These include:

When it comes to pain management, there is a perception that opiate pain medications are the best treatment, but studies have determined that there is no advantage to using opioid pain medications for the treatment of chronic pain in older adults when the pain is not caused by cancer. For non-cancer pain, opioids are recommended for a maximumof 3-7 days, and some over-the counter pain medications may actually be more effective.
Nightingale Homecare is committed to keeping seniors safe and well through trusted in-home care services, skilled nursing care, and more. Contact us today at (602) 504-1555 for further information on psychotropic medications or for set up a consultation for home care in Paradise Valley and the surrounding area.

PrevPreviousCaring for a Loved One with Cancer
NextIs It Time to Say “Hit the Road” to Senior Driving?Next

Start Off Summer With a Flexible New Career as a Caregiver!

The Eye-Opening Link Between Alzheimer’s and Vision